How bout them apples? 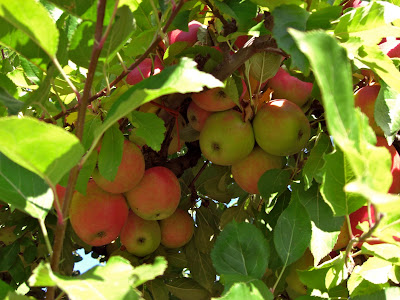 "How about them apples?"  It was a common phrase uttered from my very sassy, 4'11", New York,  Jewish, chain-smoking (until quitting cold turkey post heart attack), vegetarian Grandmother.

Me?  I'm a huge fan of apples.  My Southern upbringing deprived me of the beauty of berries, green vegetables, and really any fresh produce.  But we had apples!  And bananas!  And oranges!  Hurray!  And while I've kicked the bananas and oranges mostly to the curb, the apple stays near and dear to my heart.

As a child, I only knew of two kinds of apples:  the red ones and the green ones.  I liked them even then, but in the last 10 years, my palate has been wowed by the plethora of variety out there.  Fujis, Braeburns, Galas, and Honeycrisps:  you all rock my world with your tastiness. 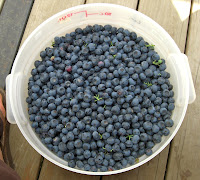 If you know me personally, then you know that I am quite a picker.   Every year, I  personally take on the challenge of picking and freezing enough blueberries, raspberries, and strawberries to keep my family outfitted in daily smoothies through the Winter.  I have shlepped my son all over hell and high water (or at least the Pacific Northwest) in pursuit of the most idyllic organic farms.  And I have found them!  I have spent hours and hours huddled over and under bushes in hot pursuit of tasty fruit.  Now I am not trying to sound like a martyr, but let's just say that many a chiropractic appointment has been had as a result of berry hunching.


Call me crazy, but it really never crossed my mind that I could go apple picking.  That is until my friend, Michelle invited me to join her and a group of friends last year at Sauvie's Island.  Sauvie's Island?!  Well that's practically my backyard!  I've subscribed to my CSA, Sauvie Island Organics, for years for weekly produce and it's one of the places I go berry picking when I'm not up for the long drive.  They have apples there too?  Who knew?

Ok, people, let me break it down for you:  Apple picking is THE EASIEST fruit to pick in the whole wide world!  Unlike those itty bitty berries that you hunt down and caress, apples are large.  No neck straining, bending, pulling, yanking, or torking required.  You can pick hundreds and hundreds of apples in mere minutes.  I timed it this year, and my 4 year old son and I picked 50 lbs of apples in 15 minutes and that included stopping to take bites of apples off of each tree.  Fifteen minutes of picking, two hours of sitting in the sunshine in the quiet of an orchard, and weeks and months of tasty treats!  And did I mention cheap?  Fifty pounds of local apples = thirty dollars and some change!

Now I like my food to be fresh, easy, cheap, and tasty,but most importantly, I want it to be healthy.  Apples are all that!  If you google them like I did, you will learn all sorts of interesting facts about the benefits of apple eating.  To highlight a few, they contain malic and tartaric acid which helps prevent liver and digestive disfunction.  They are known to regulate blood sugar, be antiviral, clean teeth and strengthen gums, lower cholesterol, and add good fiber to your diet.  "Yahoo!," says this colon hydrotherapist, giving it her stamp of approval.


I do loads of things with apples:  I eat them fresh (with almond butter), sauce them, dehydrate them into apple rings and fruit leather, juice them with veggies for some sweetness, and make apple crisp at least once a week.  Thanks to Andrea Livingston, I am wild about raw food desserts.  That being said, there's nothing quite like warm apples on a cool Fall night.  Andrea's raw food delights inspired me to create a crisp where the apples are baked but the topping is raw.  Yum-o-rama!  And because I love you all, here is the recipe plus my recipe for sauce.  Enjoy!


Half Baked/Half Live Apple Crisp
(I rarely measure things out so this is an approximation.  Luckily apple crisp is  not the kind of thing you can mess up!  Add more or less of the following ingredients and it will still turn out good.)

Directions:
Preheat the oven to 350.  Cut up apples into slices or chunks and layer in a glass baking dish.  I leave the skins on, but feel free to peel them if you prefer.  Cut the butter and/or coconut oil into little chunks and drop those bits onto the apples.  Drizzle the apples with honey and sprinkle cinnamon and salt on top.
Put in the oven to bake until the apples are soft (usually 30ish minutes depending on the size of your apple chunks).

While the apples are in the oven, make your crisp topping by putting the almonds and/or pecans into a food processor with an S-blade.  Process them until they are chopped into small bits.  Then slowly add the dates, one at a time, into the food processor until they are sufficiently mixed into a crumble.

Put the topping on top of the apples and serve!  Viola! 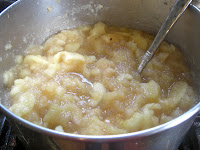 Easy Fo Sheezy Apple Sauce
Making applesauce is a very, very easy endeavor.  The concept is chop those apples up, cook them down, sprinkle with a little spice, jar up, can or freeze.  The hardest part of the whole thing is the peeling, coring, and chopping part.  For that reason, I highly recommend "The Apple Machine."  For about twenty bucks you have this snazzy gadget that does it all at once in seconds.  And my little guy loves doing it himself!

Ingredients:
Apples!  (as many as you want)
Cinnamon
A Touch of Salt
Water

Directions:
Peel, core, and chop up your apples.  Put them in a pot ( I use a big soup pot because I do high volume!).  Pour in about about an inch or two of filtered water so that the apples do not scorch.  Bring apples and water to a boil and then bring down to a low setting, cover, and let them simmer.  You will need to periodically stir them up as they start breaking down.  Don't be afraid to add more water if need be, or boil some of the water off.  It will take awhile to break the apples down to a saucy consistency.  Once there, add a touch of salt, cinnamon, cardamon, ginger, or whatever spices you please.
Posted by allswellpdx at 1:47 PM 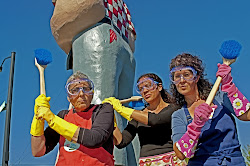 Listen to All's Well That Ends Well's very own Jill Simons, colon hydrotherapist, "talking shit" on KBOO's Healthwatch show . The show was aired this past August and was hosted by Dr. David Naimon, ND. It answers all of those questions you have about colon hydrotherapy and more. Check it out!

allswellpdx
We are All's Well That Ends Well, a colon hydrotherapy practice that has been wowing the town of Portland, Oregon since 1998. We have cleaned a lot of bums and, well, there's a lot to say about it! Enjoy...

Looking for All's Well in other places?

To have blog posts delivered directly to your email inbox, subscribe here: